Legally, all law-abiding citizens including civilians can wear any type of body armor that they want. While some states have restrictions on shipping and private property can have different rules, there is no state or federal law limiting the use of body armor.

A much better question is which body armor civilians should use. In military missions, you know that you are exposing yourself to risk and you need armor to protect from enemies that will come. For civilians, in most cases, the enemy will never come.

This is why all civilians should look for these things when trying to pick out body armor:

Additionally, there is the presumed weapon the assailant can have. As the overwhelming majority of assailants domestically will have handguns, carrying around hard plates might be more trouble than it’s worth. 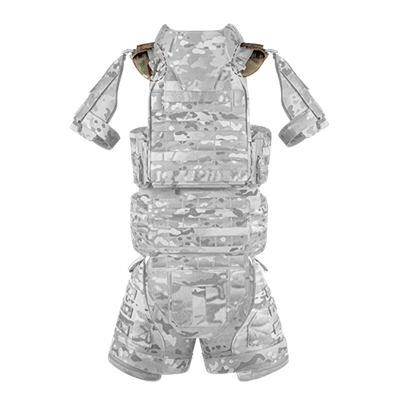 Civilians in the market to buy body armor should take everything into consideration before they choose. Generally, there are good options on the market but you will need to make sure that you are buying something for protection and not for aesthetics.

Professional Use and Mission Focus

Although property and venue security is considered civilians, they have many of the same responsibilities and risks that are present with jobs like law enforcement. Because of this danger, choosing the type of body armor to use should be gauged towards the mission as well.

But, there are some key differences that should be taken into account.

Primarily, securities shifts often last eight hours or more and consist of mostly standing up. If you are wearing gear that is too heavy, this will induce some medical problems. Short-term issues can include foot-pains; while long-term there are risks for the back and spine.

This is why good footwear is essential, as well as trimming the weight of the armor down as much as possible. Thankfully, even hard plates made from new materials like the SA3U™ Level III+ UHMWPE are now generally light and can be deployed for the entire shift.

But, those that are not capable of acquiring UHMWPE plates will need to go with soft armor from UARM. This armor will still stop virtually all types of handgun fire. But, soft armor won’t stop rifles from penetrating, and some employers might have issues if you don’t have the plates.

Private Use and Protection

For private use things are different. Although you can legally use the exact same armor as does the US Army deployed abroad, that choice might not be the best solution for your security.

First of all, the same issue with weight exists as with security jobs. You don’t want to have something heavy on you for the entire workday. The tax on your feet and back will be increasingly troublesome.

Also, having everyone see that you have armor might not be the best idea. If there is an attack, people wearing overt carriers stand out like a sore thumb and can be picked out as a target. Going covert in that situation might be a better idea.